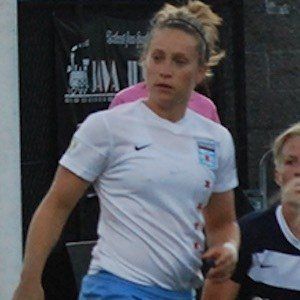 Professional soccer forward and full-back who is known for her time with FC Rosengard in Sweden. She had previously played for the Chicago Red Stars and Houston Dash clubs of the National Women's Soccer League.

She played soccer collegiately for the University of Illinois Fighting Illini women's team. She earned her spot as a walk-on. In 2006, she was named the Big Ten Conference's Offensive Player of the Year.

She debuted for the United States Women's National Team in October 2009. In 2015, she served as captain of the Houston Dash team.

On July 8, 2015, she posted a picture to Twitter announcing her marriage to her former Houston Dash teammate Erin McLeod.

Her wife, Erin, was the former captain of the Houston Dash immediately before she took over.

Ella Masar Is A Member Of