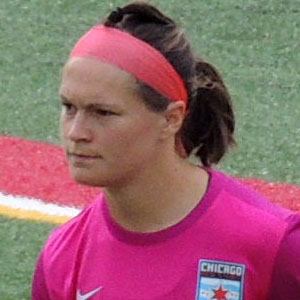 Goalkeeper who joined the Houston Dash in 2014 after playing for Dalsjofors GoIF and the Chicago Red Stars from 2011 to 2013. She began her long tenure with the Canadian national team in 2002.

She debuted professionally for the Vancouver Whitecaps in 2004.

She was born in St. Albert, Canada. In 2015, she married fellow soccer player Ella Masar.

She and midfielder Diana Matheson became teammates on the Canadian national team.

Erin McLeod Is A Member Of