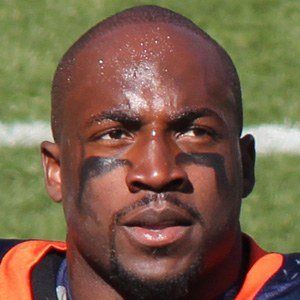 NFL outside linebacker who was selected in the fourth round of the 2006 NFL Draft by the Denver Broncos. He signed with the Baltimore Ravens in 2013 after seven years with the Broncos.

He was a highly decorated player at the University of Louisville, winning the Bronko Nagurski Trophy as well as the Ted Hendricks Award.

He broke the NCAA single-game sack record when he achieved six sacks against the University of Kentucky Wildcats during his 2005 collegiate season.

His parents were Hatian immigrants and he grew up one of 10 children.

He was teammates with the great Broncos cornerback Champ Bailey on the Broncos.

Elvis Dumervil Is A Member Of