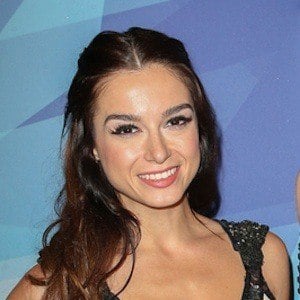 English circus performer who has taken her rollerskating daredevil act around the world, having personally performed for the likes of Princess Anne and Prince Charles. She is known to television audiences for her appearances on such shows as America's Got Talent and Big Brother: Celebrity Hijack.

She began her rollerskating training at age 4 and performed professionally for the first time at age 6.

She has regularly performed with the popular Las Vegas act Absinthe.

Her brother Victor is part of her rollerskating act. Her parents are Billy and Carmen Arata.

She was the runner-up on Big Brother: Celebrity Hijack, which John Loughton won.

Emilia Arata Is A Member Of