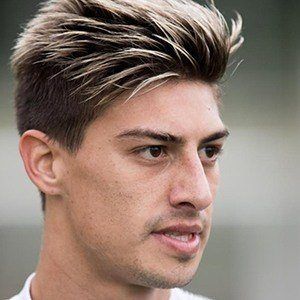 Argentinian right winger most recognized for his association with FC Zenit Saint Petersburg.

He first began his youth career in 2005 playing for the Belgrano club. In 2013, the club moved him up to his senior career. In 2017, he made his debut appearance as a member of Argentina's national team.

He made his first appearance for the Argentina national team on October 5, 2017 in a 2018 World Cup qualifier against Peru.

He was born and raised in Colonia Caroya, Argentina.

As a member of Argentina's national team, he has played alongside Sergio Romero, Federico Fazio, and Enzo Perez.

Emiliano Rigoni Is A Member Of