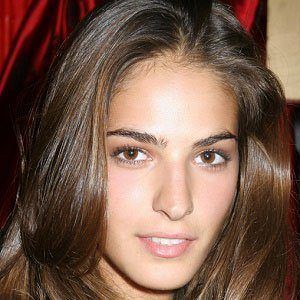 Famous for her cover shoots for Elle-Germany, Marie Claire-Italy, Vogue-Mexico, and Harper's Bazaar-UK, this American-born model is also notable for her advertising campaigns for Basler and Dolce & Gabbana, as well as for her runway work for designers such as Alberta Ferretti, Stella McCartney, and Alexander McQueen.

After making it to the finals of the 2001 Elite Model Look-Yugoslavia competition, she signed with Elite Model Management and began her career.

In 2007, she was photographed for the cover of the New York-based magazine Surface.

Born in Michigan, U.S.A., to Albanian parents, she spent the bulk of her youth in Montenegro before returning to the United States in her late teens. In 2014, she announced her engagement to business executive Sam Nazarian.

She walked for Christian Dior in several Haute Couture and Ready-to-Wear fashion events.

Emina Cunmulaj Is A Member Of