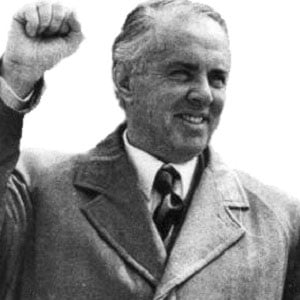 For four decades, this Albanian socialist politician served as First Secretary of his country's Party of Labour. For the last ten years of his life, he was also Prime Minister of Albania.

After dropping out of both the the University of Montpellier and the Sorbonne, he opened a small business that was quickly shut down by the fascist, Italian-controlled Albanian government. Soon thereafter, he joined the Communist Party of Albania.

His career was marked by harsh treatment of his political opponents; he was a strong proponent and frequent employer of the death penalty.

His marriage to Nexhmije Hoxha resulted in sons named Ilir and Sokol and a daughter named Pranvera. Raised in the Bektashi Islamic faith, Hoxha denounced all religion after joining the Communist Party.

He and Fan Noli both held office as Prime Minister of Albania.

Enver Hoxha Is A Member Of