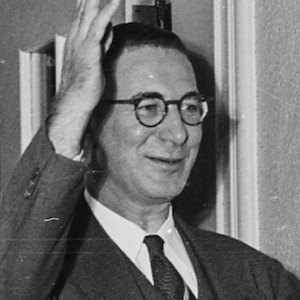 Politician and democrat from Tennessee who was a US Senator from 1949 to 1963. He was also the leader of the the 1950s Senate investigation into organized crime which became a prominent national figure during its run.

His committee interviewed hundreds of experts and witnesses in 14 cities over 15 months, with Kefauver using the free publicity from televised hearings to pave the way for his political ambitions.

Positioning himself as an everyman up against a syndicate, he gave regular press conferences during breaks in the hearing, conveniently arranged just before the evening editions of the papers.

He was born in Madisonville, Tennessee, to Robert Cooke Kefauver, a hardware manager, and Phredonia Bradford.

His political efforts paid off when Adlai Stevenson chose him to be his runningmate in the 1956 presidential elections, but they were defeated by Dwight D. Eisenhower and Richard Nixon.

Estes Kefauver Is A Member Of