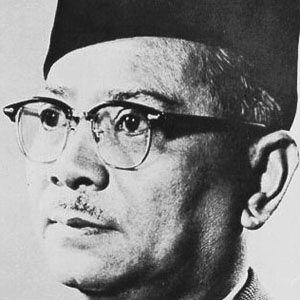 Politician who served as the First Prime Minister of Malaysia from 1957 to 1970.

He and his siblings suffered from both cholera and malaria as children and he received a scholarship to Cambridge University and traveled to England at the age of sixteen.

He declared an independent Malaysia in front of thousands at the 'Stadium Merdeka' on August 31st 1957 and he helped choose it's first national anthem "Negaraku".

He was married four or more times (many of his weddings were secret), and had eight children.

Like him Mahathir Mohammad was a Malaysian Prime Minister (the fourth), who was in office from 1981 to 2003.

Tunku Abdul Rahman Is A Member Of