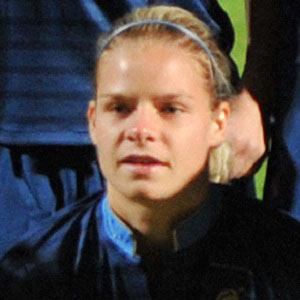 French midfielder who began her club career with Stade Briochin in 2007, then joined Olympique Lyon in 2010. She debuted with the French national team in 2009.

She started playing soccer at the age of five and spent her youth career with Trélissac, AS Guermeur, Lorient and CNFE Clairefontaine.

She was born in Grasse, France.

She and Swedish striker Lotta Schelin became teammates on Olympique Lyon in 2010.

Eugenie Le Sommer Is A Member Of