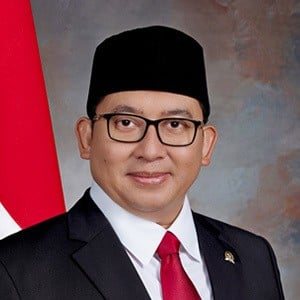 Indonesian politician best recognized for being the deputy speaker of the Indonesian People's Representative Council. He is also known for having been one of the founders of the Great Indonesia Movement Party of which he later became the Vice Chairman.

He attended both the University of Indonesia as well as the London College of Economics and Political Science. His political career started in 2014 when he was elected to be a member of the People's Representative Council in the West Java 5th district. He later went on to become Deputy Speaker of the council on Politics and Security and in 2016 was elected Speaker of People's Representative Council.

He has also written and published several different books including The Politics of the May 1998 Riots in 2004 and Dreams I Keep: A Collection of Poems in 2013.

He was born and raised in Jakarta, Indonesia and marries Katharine Grace. Together they had two children: Shafa and Zara.

In 2015, he attended a press conference for President Donald Trump where he was accused of receiving graft in the form of Trump Campaign accessories as well as money which were seized by the Corruption Eradication Commission.

Fadli Zon Is A Member Of