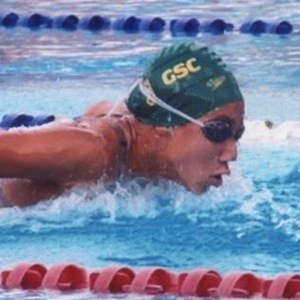 Swimmer who has risen to fame as the fastest female swimmer in Egypt and the African continent as of August 2018. She earned two golds and one silver medal at the 2018 Mediterranean Games after being named the Female African Swimmer of the Year by Swimming World magazine.

She began swimming at age 5. She later swam for the University of California-Berkeley Bears, where she was named the top female athlete for the 2017-2018 season.

She earned multiple gold medals in a litany of swimming events at the 2015 All-African Games. In 2017, she was named the best female athlete from Africa by the Association Of National Olympic Committees.

Her parents' names are Hisham and Randa. She has one brother named Ahmed.

She competed against eventual gold medalist Ranomi Kromowidjojo in the 50 meter freestyle event at the 2012 Summer Olympics.

Farida Osman Is A Member Of