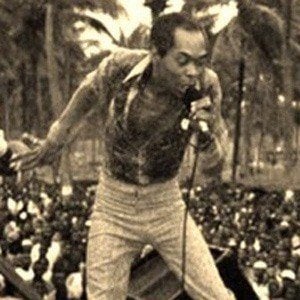 Afrobeat pioneer, political activist, composer, and musician. His life was commemorated in an off-Broadway musical called Fela!, which was nominated for more than ten Tony Awards.

He lived in London and attended Trinity College of Music, where he founded his first band called Koola Lobitos.

He married his first wife, Remilekun Taylor, in 1960 and had three children with her; in 1978, he married twenty-seven women.

Kuti was referenced by Thom Yorke as one of his larger influences in creating Atoms for Peace.

Fela Kuti Is A Member Of