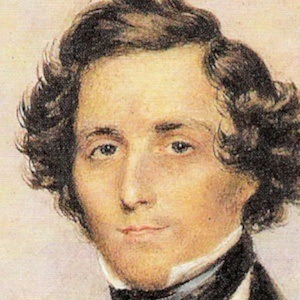 Early Romantic German musical prodigy known for his Song Without Words and the overture The Hebrides. He was founder of the Leipzig Conservatoire.

He began composing when he was a child, and his public concert debut came when he was nine. He wrote 12 string symphonies between ages 12 and 14.

He became conductor of the Leipzig Gewandhaus Orchestra in 1835. During his tenure, he reintroduced Franz Schubert and debuted St. Paul, his famed oratorio.

His grandfather was the famed philosopher Moses Mendelssohn. His family was Jewish, but nonreligious. They did not seek to profit from his talent.

He specialized in the music of Johann Sebastian Bach and helped bring about a resurgence of interest in the legendary composer in Germany.

Felix Mendelssohn Is A Member Of