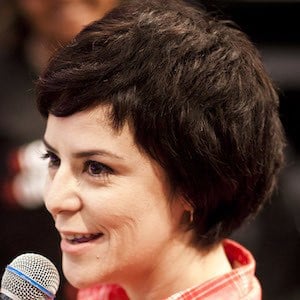 Singer and guitarist who rose to fame as the frontwoman for the Brazilian rock act Pato Fu. She released her debut solo album, Onde Brilhem os Olhos Seus, in 2007.

She was raised in Belo Horizonte, Brazil. She joined Pato Fu in 1992.

She recorded the track "Águas de Março" to benefit the Red Hot Organization. Proceeds from the track went to HIV/AIDS prevention.

She married musician John Ulhoa, with whom she has a daughter named Nina.

She recorded a collaborative album with Andy Summers called Fundamental (2012).

Fernanda Takai Is A Member Of