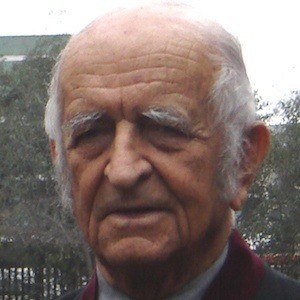 Peruvian sculptor considered one of the most significant Peruvian sculptors of the modern era, Szyszlo is also known for his abstract prints and paintings. He is particularly famous for a giant sculpture titled Intihuatana.

Following his debut solo exhibition in Lima, Peru in 1947, he displayed his work throughout South and Central America, as well as in the United States and Europe.

He graduated from the Pontifical Catholic University of Peru's School of Plastic Arts.

He was raised in Lima, Peru by a Polish father and a Peruvian mother. His marriage to poet Blanca Varela resulted in two children.

While living in Europe during the late 1940s and early 1950s, he became part of an artistic and literary circle that included Mexican-born poet Octavio Paz and French surrealist writer Andre Breton.

Fernando De Szyszlo Is A Member Of