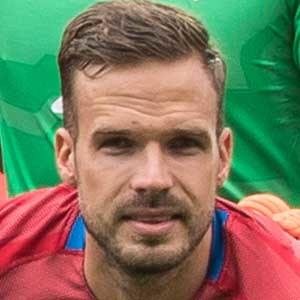 Left back who has gained fame for his career for clubs across Europe, including within the Turkish Super Lig with Trabzonspor beginning in 2018. He previously played in the Czech First League with FK Baumit Jablonec, with whom he won the Czech Cup in 2013.

He launched his pro soccer career in 2009 for FC Tescoma Zlín.

He made his debut for the Czech Republic national team in 2015. He played for FC Midtjylland in the Danish Superliga between 2015-2018.

He was originally born and raised in Přerov, Czech Republic.

He and Joao Pereira have played as teammates for Trabzonspor.

Filip Novak Is A Member Of