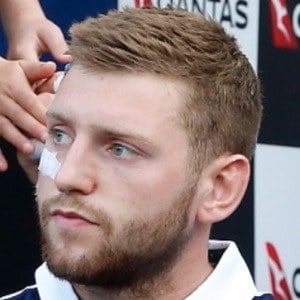 Scottish rugby union player who became Scotland's first-choice Number 10 during the Six Nations Championship in 2015. He began playing for the Glasgow Warriors in the Guinness Pro12 league in 2012.

He began playing for his hometown team, the Stirling County Colts, in 2011. He worked as a stonemason for three years after secondary school.

He worked his way onto the Scottish national team a mere six months after debuting with Stirling.

He was born in Stirling, Scotland.

He played with Greig Laidlaw on the Scottish squad at the 2015 Six Nations Championship.

Finn Russell Is A Member Of