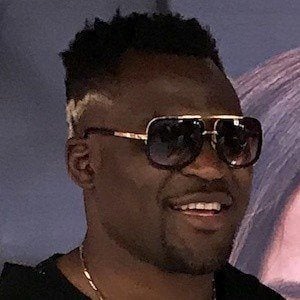 Mixed martial artist who became the top-ranked heavyweight fighter in the UFC with victories over the likes of Bojan Mihajlović, Anthony Hamilton, and Andrei Arlovski. He set the world record for the highest punching power ever measured by the UFC. He has a reach of 83 inches and weighs approximately 257 pounds.

He grew up Batié, a village in Cameroon, where he worked at a sand quarry. He did not begin his martial arts training until age 22.

His victories over Anthony Hamilton and Andrei Arlovski both earned him Performance of the Night honors. He has a total of 12 knockouts in his career.

His father was a street fighter.

He defeated Alistair Overeem via knockout at UFC 218 in December 2017.

Francis Ngannou Is A Member Of