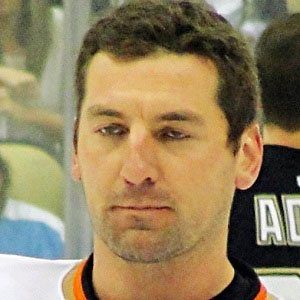 NHL defender who debuted with the Montreal Canadiens in 2003, then became a long-time Anaheim Duck, helping the team win a Stanley Cup Championship in 2007. He signed with the Colorado Avalanche in 2015.

He was selected 75th overall in the 1998 NHL Draft by the Canadiens. He played only one game in Montreal before he was claimed on waivers by the Columbus Blue Jackets. His tenure in Columbus was short as well, only 11 games, and he was traded to the Ducks 2005.

In 2013, he won The Hockey News' Rod Langway Award, given to the league's best defensive defenseman.

He has a son named Samuel and a daughter named Emily with his wife Marie Claude.

He and legendary scorer Teemu Selanne were two of the leaders of the Ducks' 2007 Stanley Cup Champion team.

Francois Beauchemin Is A Member Of