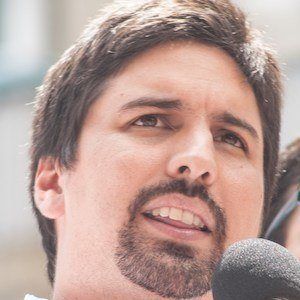 Political leader and social activist who is best known for his role as First Vice-President of the National Assembly of Venezuela which he was elected to in January of 2017.

After graduating with a degree in Social Communication from Universidad Católica Andrés Bello in 2008, he ran as Metropolitan Councilor of Caracas for the regional elections of November of that same year. After he won, he became the youngest voted into office in the country's history.

In 2007, he participated in several protests for the end of the concession of RCTV. He and several other student leaders actively participated in the electoral campaign for the "NO" against the Constitutional Referendum. In December 2007, the opposition won its first electoral victory against officialdom. He soon after became a representative for the youth movement.

He was born and raised in Puerto La Cruz, Anzoátegui in Venezuela.

As a member of the Popular Will party, he can be seen in relation to other political leaders who were also members including Leopoldo Lopez.

Freddy Guevara Is A Member Of