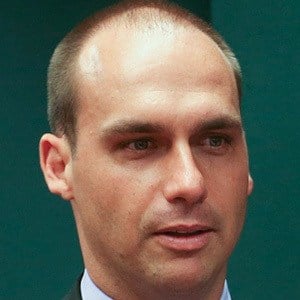 Lawyer and federal police officer who became a member of the Chamber of Deputies in 2015. In 2018 he was reelected to his second term as Federal Deputy.

He studied law at the Federal University of Rio de Janeiro.

In 2019 he became a South American representative The Movement, a right-wing organization formed by Steve Bannon.

His father is former president Jair Bolsonaro. He has three brothers and a sister. He became engaged to psychologist Heloisa Wolf in 2019.

Eduardo Bolsonaro Is A Member Of