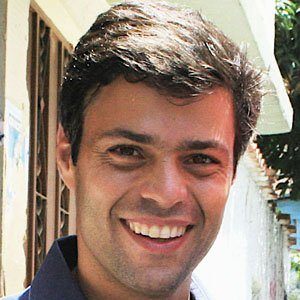 After serving from 2000 to 2008 as Mayor of Chacao, this Venezuelan politician founded and led a national, progressive political party known as Voluntad Popular (Popular Will).

After earning a degree in sociology from Kenyon College (in Ohio, U.S.A), he received a master's degree in public policy from Harvard University.

He was arrested for his role in the 2014 Venezuelan protests. Both the United Nations and Amnesty International spoke out against the arrest, calling it an unjust political maneuver.

He married human rights activist Lilian Tintori in 2007; they had a son named Leopoldo Santiago and a daughter named Manuela Rafaela.

Leopoldo López Is A Member Of