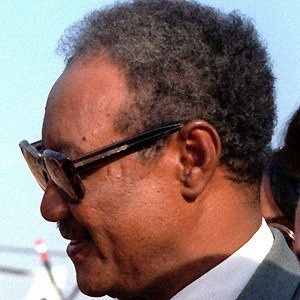 Politician who was the President of Sudan from 1969 to 1985. He came to power in the aftermath of a coup perpetrated by his party, the Sudanese Socialist Union and was exiled 16 years later after imposing Sharia law throughout the country.

He was educated at Hantoub School, and was expelled in 1948 after he protested against British rule.

He is a 1966 graduate of the United States Army Command College.

He is a prominent politician from the Sudan much like Sadiq Al-Mahdi.

Gaafar Nimeiry Is A Member Of