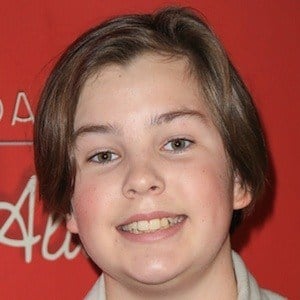 Child actor and philanthropist who landed the Amazon pilot The Kicks in the role of Bailey Burke in 2015. Other 2015 credits of his include Nicky, Ricky, Dicky & Dawn and voice roles in Sofia the First and Jake and the Never Land Pirates. He has been featured in a number of Conan sketches and in the 2012-2013 show Jedi Camp as well.

At seven years old, he became the youngest SAG Bookpal reader. He became a member of Mensa when he was nine years old.

Before becoming a teenager, he had already earned accolades including GenerationON Hasbro Awards, Johns Hopkins Center for Talented Youth and SAG Looking Ahead Awards. He became a TedX speaker, speaking at the 2013 Mind the Gap TEDx Conference.

He is from Anaheim, California and grew up alongside his brother Tristian.

The Kicks is based on a book written by World Cup champion and Olympic gold medalist Alex Morgan.

Gabe Eggerling Is A Member Of