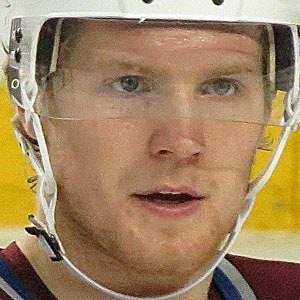 NHL winger who became the youngest captain in NHL history (19 years, 9 months, and 13 days) with the Colorado Avalanche in 2012.

He made his professional hockey debut in the Swedish Elite League at the age of 16 years and 90 days - the youngest in Djurgarden's history - and competed for Sweden in the U-18 Championship.

He was the Calder Memorial Trophy as NHL's Rookie of the Year in 2012, finishing with a team-leading 22 goals and 30 assists.

His father Tony is a former defenseman for Hammarby in the Swedish Elite League. His mother Cecelia is a chef. He has an older brother named Adam and a twin sister named Beatrice.

He grew up idolizing another great Swede on the Colorado Avalanche: Peter Forsberg.

Gabriel Landeskog Is A Member Of