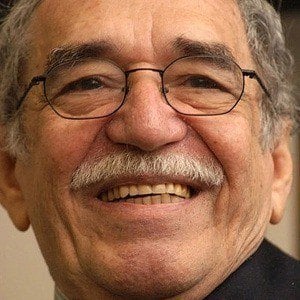 Illustrious Colombian writer who was awarded the Nobel Prize in Literature in 1982. Also known as Gabo, he's considered one of the most significant authors of the 20th century. His most famous novels include One Hundred Years of Solitude (1967), Autumn of the Patriarch (1975), and Love in the Time of Cholera (1985).

He studied law at the National University of Colombia during the 1940s. During this period, he segued into a journalistic career, writing articles and columns for such local newspapers as El Universal and El Heraldo.

He became one of the central figures of the Magical Realism literary movement. It took him 18 years to write One Hundred Years of Solitude, as he likened ideas to wine, suggesting that they improved with age.

He was born in Colombia and was raised primarily by his maternal grandparents. He married Mercedes Barcha Pardo; the couple had two sons, Rodrigo and Gonzalo.

His novel Love in the Time of Cholera was adapted into a 2007 film starring Javier Bardem and Giovanna Mezzogiorno.

Gabriel García Márquez Is A Member Of