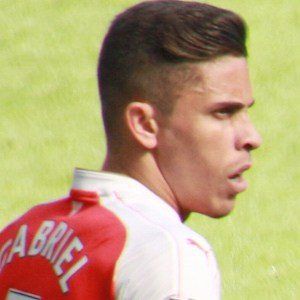 Professional soccer player best known for becoming a fan favorite when he joined the English club Arsenal in 2015. In 2017, he began playing for Valencia CF.

He began his youth soccer career in 2009 playing with Taboão da Serra before joining the Vitória football club, where he would ultimately begin his senior career.

He began his professional career playing with Vitória in his homeland Brazil before transitioning to the Spanish club Villarreal. In 2013, he was named the best central defender at the Campeonato Baiano.

Though a native of Sao Paolo, Brazil, he later lived in London, England.

He replaced injured Brazilian national player David Luiz during a friendly match against France and Chile in March 2015.

Gabriel Paulista Is A Member Of