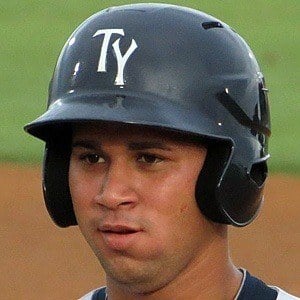 Catcher who made his Major League Baseball debut in 2015 for the New York Yankees. He became popular for the social media hashtag #IAmGary, which earned him more than 170,000 Twitter followers and 490,000 Instagram followers.

He initially signed with the New York Yankees as an international free agent from the Dominican Republic in 2009. Prior to the 2010 season, he was ranked as the 7th best Yankee prospect.

He finished second in 2016 Rookie of the Year voting after playing in only 53 games. He his 19 home runs in 45 games, which made him the then-fastest player to reach that mark in modern baseball history.

His wife's name is Sahira. He shares one daughter with her.

He was given the nickname "The Kraken" in 2016 by the New York Yankee's then-GM Brian Cashman.

Gary Sanchez Is A Member Of