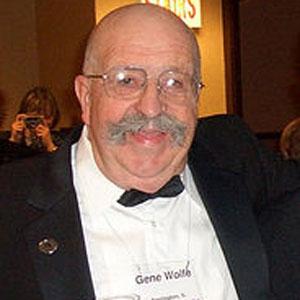 American science fiction and fantasy writer who is best known for his four-volume work, The Book of the New Sun (1980-83). For works such as The Death of Doctor Island, The Claw of the Conciliator, and Soldier of Sidon, he won numerous Nebula and World Fantasy Awards.

He briefly attended Texas A&M University before being drafted into the Korean War. He later studied to be an industrial engineer and helped to design a machine that produced Pringles potato chips.

He is known for his dense prose and for the influence of his Catholic faith upon his writing.

He was born in New York City. He was married to Rosemary Wolfe up until her death in December 2013.

He and Andy Duncan both received Nebula Awards.

Gene Wolfe Is A Member Of