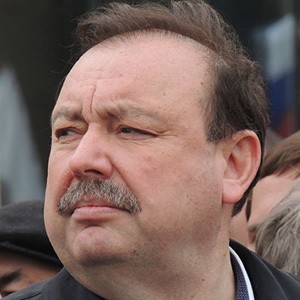 Russian politician and businessman who became a member of the Alliance of Greens and Social Democrats in 2014. He first won an election to the State Duma in 2001 and retained his seat in both 2003 and 2007.

He earned a degree in languages from Kolomna State Pedagogical Institute in 1978.

He held financial stakes in the private security firm Oskord and the construction company Kolomensky Stroite.

He and his wife have sons named Dmitry and Vladimir.

In 2012, The Moscow Times called him "one of parliament's most vocal and charismatic critics" of President Vladimir Putin.

Gennady Gudkov Is A Member Of