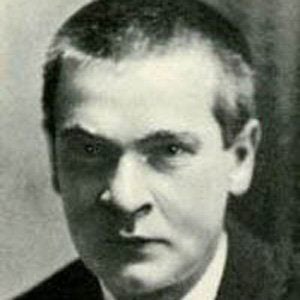 Austrian Expressionist poet known for Der Herbst des Einsamen (The Autumn of The Lonely), among other works. Several of his poetry collections, including Song of the Departed and To the Silenced, were published in English after his death.

He studied to become a pharmacist. His first and only non-posthumously-published literary work, Gedichte (Poems), was first printed in 1913.

He began using drugs and frequenting brothels as a teenager. During this period, he also wrote his first poems.

He was born and raised in Salzburg by a Hungarian father and a Czech mother. He died at the age of twenty-seven as the result of a cocaine overdose.

His literary career was supported by Ludwig Wittgenstein, who gave him a large monetary gift.

Georg Trakl Is A Member Of