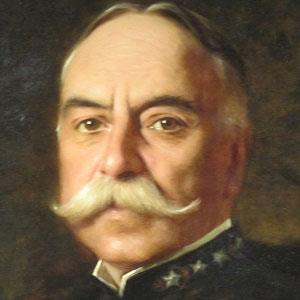 Military veteran notable for becoming the first person in United States history to attain the rank of Admiral of the Navy. As Admiral, he became famous for his victory in the Battle of Manila Bay during the Spanish–American War.

He began attending Norwich Military School in 1852 and was admitted into the Naval Academy in 1854.

A special military decoration, the Dewey Medal, was created in his honor, making him one of the small handful of Americans ever to wear a governmental medal bearing his own image.

He married his first wife Susan, with whom he had a son named George, in October 1867. After her death, he got remarried to Mildred M. Hazen.

He was a frequent horseback-riding partner of President Theodore Roosevelt.

George Dewey Is A Member Of