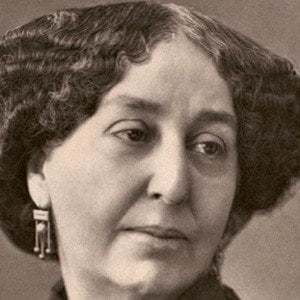 Nineteenth-century French novelist who penned her memoirs and other literary works under a male pseudonym. Her novels include La Petite Fadette, Indiana, and A Winter in Majorca.

She was notorious in France for her affairs with Gustave Flaubert and Alfred de Musset.

Born Amantine Lucile Aurore Dupin, she was raised on her grandmother's French estate. She and her husband, Casimir Dudevant, had two children.

She once had a romantic relationship with composer Frederic Chopin.

George Sand Is A Member Of