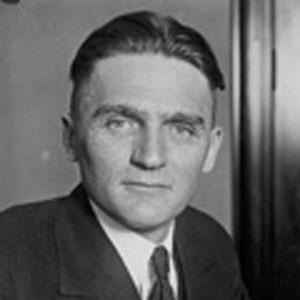 Republican politician who served as the United States Senator from North Dakota from 1925 to 1945. He led the eponymous special committee investigating bankers' involvement in WWI, which turned public opinion toward isolationism.

He went into the newspaper business, buying a North Dakota daily with money he inherited from his father and used its editorial pages to speak out against big business.

In the Senate he chaired the committee investigating banking and munitions interests in WWI, which suggested the U.S. was persuaded to enter the war by the ammunitions makers.

He was born in Outagamie County, Wisconsin, his father Raymond Nye a newspaper editor and supporter of leftist leaders.

As Chairman of the Public Lands commission, he found the illegal lease of an oil field by Warren G. Harding's interior secretary, which led to the Teapot Dome Scandal.

Gerald Nye Is A Member Of