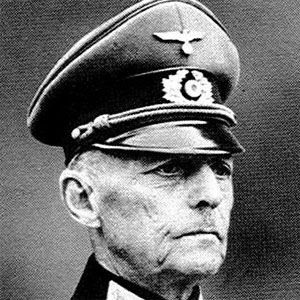 Field Marshal in the Imperial German Army who took part in both the Nazi invasion of France and the Russian campaign. His German troops were defeated during the Battle of Normandy.

During World War I, he held several low-ranking and administrative positions in the German Army.

Several of his fellow German Army officers tried to involve him in their insider plot to assassinate Hitler, but he resisted.

He married Luise "Bila" von Goetz in 1902; they welcomed their one child, Hans Gerd von Rundstedt, the following year.

Though not as infamous as Nazi leader Adolf Eichmann, Von Rundstedt was likely guilty of Nazi war crimes; only his age and ill health prevented him from being tried.

Gerd Von Rundstedt Is A Member Of