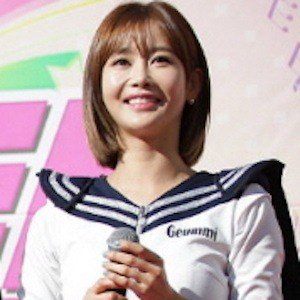 Singer known as a member of Crayon Pop. Recognized as the leader of the K-pop girl group, the band has released several albums and hosted their own YouTube web series on Crayon Pop TV.

Before entering the entertainment world, she worked as a skin therapist in a hair transplant clinic.

In December 2014, she made her acting debut in the leading role of the web drama 6 Persons Room.

She was born and raised in Seoul, South Korea. Her birth name is Baek Bo-ram.

Her bandmates in Crayon Pop include Soyul, Choa, Way, and Ellin.

Geummi Is A Member Of