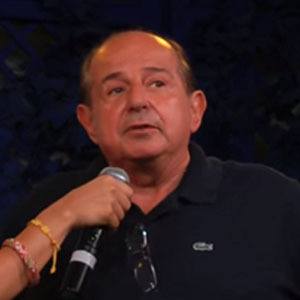 Television personality, writer and actor who has hosted a great many shows on Italian television, including Fantastico 10, I Cervelloni and Domenica In. He has acted in such films as Stormtroopers II (1982) and 18 Years Later (2010).

He studied at the Istituto Massimiliano Massimo in his hometown of Rome, Italy. For a time, he was a monologue writer for Pippo Franco.

He was appointed as a Commendatore of the Italian Republic in 2007.

He was married to Valeria Donati from 1989 to 2008. He has daughters named Michela and Manuela.

He is a former classmate of European Central Bank President Mario Draghi.

Giancarlo Magalli Is A Member Of