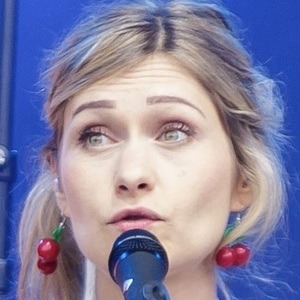 Lithuanian-born singer, songwriter, and comedian who is known for her work often performed in French. She is best recognized for having released the hit singles "Chut" in 2014 and "Toutes des Putes" in 2014.

She moved to Paris when she was seven. She studied drama at Cours Florent and ENSATT before she started performing her own music in the early 2000's. She went on to release her debut album in 2011 entitled Mon Premier Disque.

She is known for having become a laureat of Fonds d'action et d'initiative rock in 2012.

She was born in Lithuania but moved to Paris at the age of seven with her mother after the death of her father.

Other comedians also known for performing out of France include Jean-Marie Bigard and Hakim Jemili.

GiedRé Is A Member Of