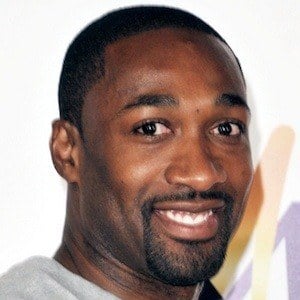 High scoring former NBA point guard known as "Agent Zero." A 3-time All-Star with the Washington Wizards from 2005 to 2007, he was also named the NBA's Most Improved Player in 2003 during his final season with the Golden State Warriors. He announced his retirement in 2013.

He wanted to be drafted by his favorite team, the New York Knicks, but fell to the Golden State Warriors at 30th overall instead.

After his run with the Wizards, which ended in 2010, he had brief stints with the Orlando Magic and Memphis Grizzlies before joining the Shanghai Sharks in the Chinese professional league in 2012.

He previously dated Laura Govan, with whom he had four children: Aloni, Izela, Alijah, and Hamiley.

In 2006, he scored a Wizards franchise record 60 points in an NBA game against Kobe Bryant and the LA Lakers.

Gilbert Arenas Is A Member Of