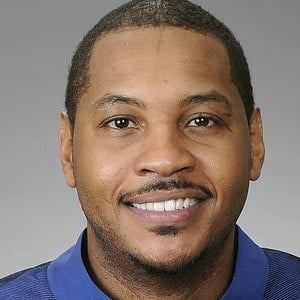 2013 NBA scoring champion with the New York Knicks who won gold medals at the Olympics in 2008, 2012 and 2016. He played for Oklahoma City Thunder during the 2017-2018 season and signed with the Houston Rockets a year later. And with Portland Trail Blazers in 2019.

He attended Towson Catholic High School before going on to Oak Hill his senior year. During his freshmen year at Syracuse, he led the Orangemen to the 2003 NCAA Championship.

He was drafted 3rd overall by the Denver Nuggets in 2003 and in 2007, he was named to his first of many NBA All-Star teams.

He was selected two picks behind NBA legend LeBron James in 2003.

Carmelo Anthony Is A Member Of