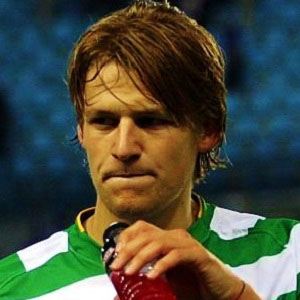 Dutch centre back who has found success with clubs like Feyenoord, Celtic and Sheffield Wednesday, winning multiple league titles with Celtic from 2008 to 2012. He earned his first senior cap with the Netherlands in 2009.

He was born in Doetinchem, Netherlands and represented his home country at the 2001 FIFA World Youth Championship. He made his senior club debut for Feyenoord the same year.

He was named the captain of Sheffield Wednesday for the 2014-15 season.

He has a daughter named Ambra with Leonora Cecchi.

He won the UEFA Cup title with Feyenoord alongside star striker Robin van Persie in 2002.

Glenn Loovens Is A Member Of