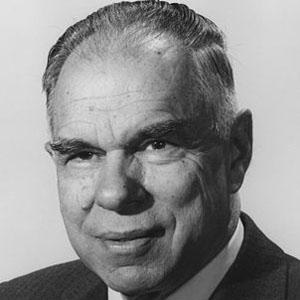 Winner of the 1951 Nobel Prize in Chemistry for his discovery of plutonium and transuranium, which is heavier than uranium. He was also the Chairman of the United States Atomic Energy Commission from 1961 to 1971.

During WW II he was in charge of scaling up plutonium production and after the war chaired the Atomic Energy Commission.

He helped develop the atom bomb, but co-signed a letter to Franklin D. Roosevelt urging him to demonstrate the weapon to the Japanese rather than using it on them; and spent his whole career campaigning for peaceful uses of atomic energy.

He was born in Ishpeming, Michigan, the son of a Swedish immigrant mother, who he later saved with one of his discoveries.

He was an advisor to a succession of U.S. presidents, starting from FDR and ending with President George Bush in the 1980s.

Glenn T. Seaborg Is A Member Of