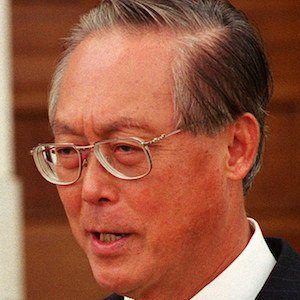 Chinese politician who served as the Prime Minster of Singapore from 1990 to 2004. He served as a Member of Parliament representing the Marine Parade Group Representation Constituency.

He earned a degree in economics from the University of Singapore in the 1960s.

He served as a Senior Minister from 2004 to 2011 after stepping down from his Prime Minister position.

He signed a free trade agreement with President George W. Bush in 2003.

Goh Chok Tong Is A Member Of