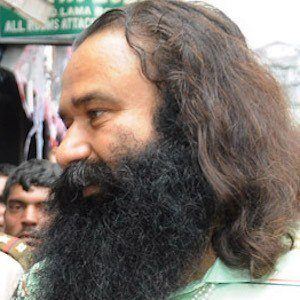 Widely known as the leader of the Indian socio-spiritual organization Dera Sacha Sauda (DSS.) He began his tenure in this capacity in September 1990, and has worked to address a litany of social issues with programs across India.

He was educated in his small Indian village of Sri Gurusar Modia. On September 23, 1990, sainthood was conferred upon him.

In 2001, he founded the disaster relief agency Shah Satnam Ji Green S Welfare Force Wing. He has also worked as an actor, and in February 2015, appeared in the film MSG: The Messenger.

He and his wife have four children. His parents are named Naseeb Kaur and Maghar Singh.

He has been parodied by comedians formerly of Kapil Sharma's sketch comedy series Comedy Nights with Kapil.

Gurmeet Ram Rahim Singh Is A Member Of