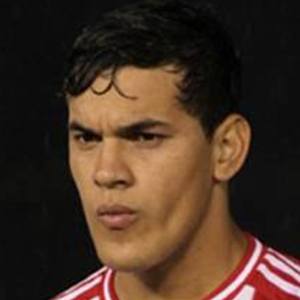 Center back who is famous for his international club career, including in Argentina's Primera Division club Lanus. In 2016, upon his signing with Italian Serie A club AC Milan, he became the first ever Paraguayan born player to play for Milan.

He began his youth soccer career with Paraguayan side Libertad. He went on to make his professional debut in 2011 with them.

He started for the Paraguayan senior team's three games in the 2016 Copa América Centenario tournament. He debuted for AC Milan in August 2016.

He was originally born and raised in San Juan Bautista, Paraguay.

He and Ignazio Abate have played on defense for AC Milan.

Gustavo Gómez Is A Member Of