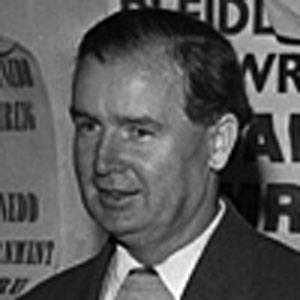 Welsh politician and author who was the President of the Welsh political party Plaid Cymru for 36 years and was known as the first Member of Parliament to represent Westminster.

He went to the University of Wales, Aberystwyth and St. John's College, Oxford.

He was the first and last president of the Celtic League from 1961 until 1971.

He married Rhiannon Prys Thomas in 1941 and they had seven children.

He participated in politics during the same time as Margaret Thatcher.

Gwynfor Evans Is A Member Of