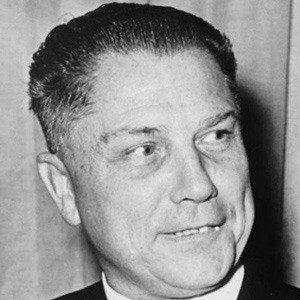 Teamsters Union leader from 1957 to 1971 who vanished mysteriously in 1975, and was officially declared dead in 1982. He was heavily involved in organized crime and in 1964 he was convicted of jury tampering, attempted bribery, and fraud.

He served as the leader and organizer of the Teamsters union, a group dedicated to furthering the rights of grocery chain workers and truck drivers.

Some say he was buried under the turf at Giants Stadium, but no proof of that has ever been found.

He got married to Josephine Poszywak in 1936, and the couple had two children together.

Jack Nicholson played him in the 1992 film Hoffa.

Jimmy Hoffa Is A Member Of