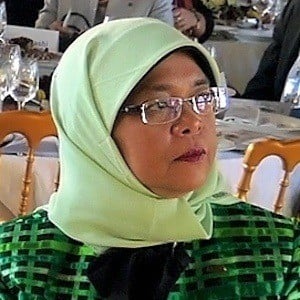 Politician who, in September 2017, was elected the first female President in Singapore's history in a walkover. She previously served as the Speaker of Parliament and the head of the National Trades Union Congress.

She was raised by her mother following the untimely death of her father. She earned a Bachelor of Laws degree from the National University of Singapore in 1981.

She is the recipient of numerous honors for her contributions to Singaporean society, including the Her World Woman of the Year Award and the AWARE Heroine Award.

She married Mohammed Abdullah Alhabshee, with whom she has five children.

She succeeded Tony Tan as the President of Singapore.

Halimah Yacob Is A Member Of