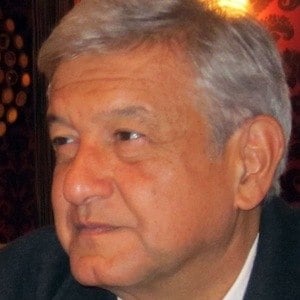 Mexican politician who became Mexico's 58th president on December 1, 2018. He first gained fame as the President of the National Regeneration Movement. He finished second in the national presidential election in 2012.

He first gained political fame when he became a the PRD candidate for the Governor of Tabasco.

He is often described as a populist and a nationalist.

He married Beatriz Gutiérrez Müller in 2006 and together they have a son named Jesús Ernesto. He also had three children with his first wife, Rocío Beltrán Medina, named José Ramón, Andrés Manuel and Gonzalo Alfonso.

He lost in the Mexican presidential election to Enrique Peña Nieto in 2012.

Andrés Manuel López Obrador Is A Member Of